Rotary Club of Whittier has contributed to the Shadow Children Project. The aim of the Shadow Children Project is the dissemination of information and awareness among Rotarians about the immense problem of street children, child trafficking, and child slavery that affects millions of children around the world. The project was launched in 2009 with the First Forum held at the LUMSA University of Rome, led by the Rotary Club of Roma Cassia, District 2080, on the initiative of Valeria Galletti and Roberto Giua, at the time President of the Club (and current member of Rotary Club of Whittier). Participating clubs include 39 clubs in Italy and 4 clubs in other countries all over the world. 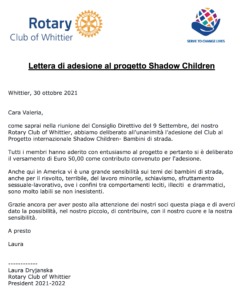